Summer Pastime: The story behind peanuts and baseball 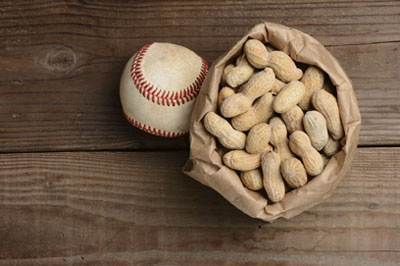 It’s the start of summer, and summer means baseball. And, what pairs best with baseball? Peanuts, of course!

The sport is popular in both the U.S. and Canada (Go Jays Go!), with peanuts becoming a staple at ballparks right from the beginning.

According to Bennett Jacobstein, author of The Joy of Ballpark Food, a pioneering ballpark concessioner, Harry Stevens, sold advertising space on scorecards to a peanut company in 1895. Instead of financial payment, the company paid him in peanuts, which were then sold at the ballparks. Since then, popular phrases and song lyrics have resulted – “Peanuts, here!,” “Buy me some peanuts and Cracker Jacks,” from the popular song “Take me out to the ballgame.”

Today, peanuts are a staple at stadiums for both traditionalists and adventurous eaters. Some enjoy shelling peanuts while intently watching the game, while others like to indulge in on-trend baseball eats, such as a thick cut slab of bacon covered with peanut butter and crushed pretzels, or peanut butter waffles. Our Second Period Munchies, Spicy Peanut Popcorn or Spicy Peanut Chicken Wings are also great game eats.

For more information on the history of peanuts and baseball, visit the National Peanut Board to learn more.