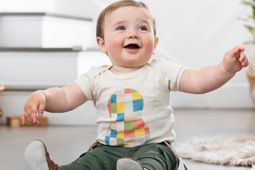 In January 2021, a meeting was held with the American College of Allergy, Asthma and Immunology (ACAAI) to discuss new clinical guidelines for the prevention of food allergy in the U.S. and Canada. Leading North American allergists, including Canada’s Drs. Edmond Chan and Elissa M. Abrams, were in attendance. The group developed and released a paper entitled, “A Consensus Approach to the Primarily Prevention of Food Allergy Through Nutrition”. This paper serves as an evolution of the allergy introduction guidelines published back in 2017, however, the new guidelines go beyond what was established four years ago to include:

A strong recommendation to introduce cooked egg and peanuts around six months, but not before four months.

In addition to introducing other allergens, babies should also be fed a diverse diet, including breastmilk or formula, fruits and vegetables, and types of meat and seafood.

Maternal exclusion of common allergens during pregnancy and breastfeeding is not recommended.

The new guidelines represent a consensus approach to primary prevention of food allergy through nutrition.