Consumer research: Who are the peanut power eaters? 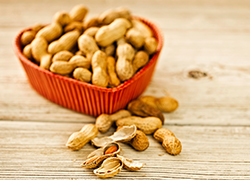 New research from Erickson shows that almost every Canadian (97%) eats peanut butter, and this number has been on the rise since 2013. As a delicious and convenient protein source, peanut butter has claimed its spot as a pantry staple with 87% of households having it on hand. Even with the widespread love of this nutty spread, research shows two distinct groups of peanut “power eaters” whose consumption habits and attitudes towards peanuts (and peanut products) are greater than the national average.

The findings of this research show that Quebec is nuts about peanuts and peanut butter, which can help those sourcing ingredients and planning menus to better understand this demographic. Whether by utilizing peanuts as an extra source of protein, or infusing peanut butter into a classic dessert, restaurants can benefit from capitalizing on Quebecers’ peanut-preferring palate. The same can be said for health-focused establishments; hardcore health nuts feel confident in the nutritional value of peanuts and peanut butter and would feel good about products using peanuts for an extra protein kick.