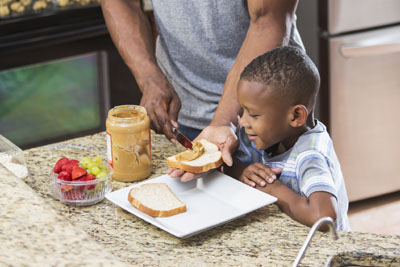 Dr. Andrew Craig looks at the two-pronged approach to reduction in child peanut allergies, including both maternal consumption of peanuts while breast feeding and direct introduction of peanuts to infants in the first year of life. According to the data analysis by Dr. Tracy Pitt from the Humber River Hospital in Toronto, this approach makes it more likely that sensitization to peanuts will be less of a risk in the child’s later life.

Dr. Craig's article follows below, and the full study can be found here.

It is easy to be complacent in Europe, North America and Australasia about the progress being made in early interventions to prevent peanut allergy. Though everyone has yet to get the message down at the grass roots, in those regions peanut protein is now recommended to be given in the first year of life (though there is still some debate about how this relates to breast feeding before six months). Undeniably the huge advance has been that guidelines no longer recommend peanut allergen avoidance while pregnant or while breast-feeding. Ironically that highlights the challenge of helping parents actually achieve early introduction of peanut for infants at high risk. Recent anecdotal reports also suggest that affluent urban parents in China and India, for example, are strongly reluctant to introduce allergenic foods such as seafood and peanuts to their infants. Food allergy rates are rising in those countries and it would be hugely regrettable if they were to repeat the errors we are only just starting to correct. So it is timely and useful for everyone to have the results of a Canadian investigation into the effects of both maternal consumption of peanut while breast feeding and direct introduction of peanut to infants in the first year of life. Does this two-pronged approach make it more likely that sensitization to peanut will be less of a risk in the child’s later life?

The answer is clearly “yes”, according to a secondary data analysis led by Dr Tracy Pitt from the Humber River Hospital in Toronto, of a cohort within the 1995 Canadian Asthma Primary Prevention Study intervention study which recruited pregnant women from Winnipeg and Vancouver. Even though collected in the mid ‘90s, this is relevant data because breast-feeding and maternal and infant peanut consumption were captured by repeated questionnaires during infancy and skin prick testing for peanut sensitization was performed at age 7 years. And the study used an intervention group and a control group. What the latest data analysis revealed was an association between these two factors and lower peanut sensitization by age 7.

Most of the families in the study had not introduced peanut in the first 12 months (<23%), which is hardly surprising as this was the 1990s and advice to avoid peanuts in pregnancy and early infant life was predominant. Surprisingly, however, of the 545 mothers included in the analysis, 58.2% reported having eaten peanuts while breast-feeding even though it was not recommended. By 7 years of age, 32 of 342 children (9.4%) were sensitized to peanuts, with the lowest incidence occurring in children who were both introduced to peanut protein before age 12 months and whose mothers ate peanuts while breast-feeding (1.7%). This combination was observed to be a protective factor against sensitization. Of course, we need to remember that sensitization and clinical allergy to peanuts are not the same thing.

Compared with this group, the incidence of peanut sensitization was significantly higher (17.6%) when mothers introduced peanuts to their infants before 12 months, but did not consume peanuts themselves while breast-feeding. It was also higher (15.6%) when mothers consumed peanuts while breast-feeding, but delayed introducing peanuts directly to their infant’s diet until after 12 months

So the key finding was that both the timing and the route of introduction were crucial. Delayed introduction or maternal avoidance of peanuts while breast-feeding, or both, was observed to create an increased risk of sensitization, which was certainly not what the standard “avoidance guidance” at the time would have predicted. It retrospect, it was unfortunate that it took so many years for that guidance to change fundamentally to what it is today.

These results add to the body of evidence underlining that fact that delaying the introduction of allergenic foods may increase the risk of sensitization and later clinical food allergy to foods like peanut. “The associations noted in our secondary analysis suggest that maternal peanut consumption while breast-feeding may differentially influence peanut sensitization depending on the timing of direct peanut introduction, and vice versa, although further research is needed to formally test this hypothesis. Maternal peanut consumption while breast-feeding paired with direct introduction of peanuts in the first year of life was associated with the lowest risk of peanut sensitization, compared with all other combinations of maternal and infant peanut consumption”, Pitt and colleagues concluded. This is a message that really must reach everywhere and not just certain parts of the world.